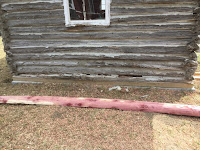 This week I’ve been repairing a log cabin for the Antelope County Museum in Neligh, Nebraska. I was told that the cabin was built as a playhouse for a prominent man’s daughter in the 1930’s.

The cabin was made out of cedar logs. This might seem a bit strange, but trees were sparse in these parts with the exception of cedar and cottonwood. I’ve also been told that the trees might have come on a train from the Black Hills, while that would have been possible, I’ve not researched it so it's hard to say. 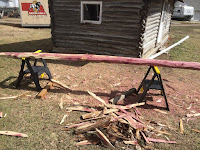 I sourced a suitable cedar log from the local area and had it sawed down the center. I knew I would have to do a lot of shaping to get it to fit so I went with an oversized log and whittled it down with a chainsaw and a power planner to get it to 6 inches wide at the bottom. It took about 5 hours of cutting and finessing to get it to fit. 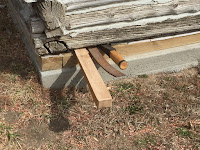 Thanks to the cabin being constructed out of a light wood raising it up with wedges to get the log in was easy. Once the weather warms up I will start replacing the missing chinking.

If you’re in the area this museum is a great place to visit and has a lot of interesting artifacts on display. A few years ago I discovered a Caesar Chelor molding plane there that was relegated to a pile of mass-produced planes from the late ninetieth century. After explaining the significance and value of the plane to the members of the museum it has since been displayed in a more appropriate manner. 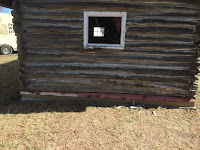 Posted by Frontier Carpenter at 6:31 PM No comments:

Home for Misfit Tool (or) Rebirth of a Tinsmith Burring Machine 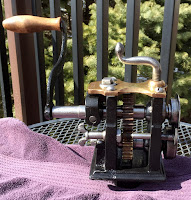 Recently I’ve gained an interested in the tinsmithing trade. This opened up a whole new area in tool collecting for me so I have been diligently searching tools sites and eBay for finds. During my searches, I’ve come to realize that tinsmithing tools are expensive and relatively hard to find. When one does happen upon a find there’s generally a lot of competition for the tool driving up its cost. This has caused me to aim for the low hanging fruit like the rusted nugget of a burring machine pictured here.

Roughly speaking (I am no expert) a burring machine forms a small 90-degree lip on the edge of a piece of tin. This tool is especially useful when forming a lip on a circle such as on the bottom of a cup. (See picture of tin bottom)

This machine was horribly rusted and I suspect it spent a lot of time in water. After soaking in rust remover I wired brushed the metal and painted the areas black that were once coated in black japanning. The original wooden handle was shot so I turned a new one on the lathe shined up the brass and put it back together. The forming heads are pitted from rust so they tend to transfer the roughness to the tin but other than that it seems to work. Pretty good for a tool around a 150 years old.

From all I’ve read and watched on videos, this is not an easy tool to use. I will need a lot of practice. But overall I am happy with the finished results.

Posted by Frontier Carpenter at 2:29 PM No comments: