The Trade of the Joiner

Came across this video on sash construction from the Arnold Zlotoff Tool Museum. Great video check it out at  http://www.arnoldzlotofftoolmuseum.com/Trade_and_Crafts_Videos.html
Posted by Frontier Carpenter at 8:44 PM 2 comments: 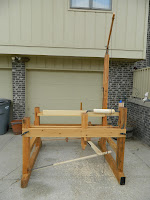 My latest project is a smaller version of a Moravian spring pole lathe. I've seen pictures of this lathe in some of Roy Underhill’s books, but I became really interested when I saw it featured on the Horn Guild’s blog. They have some great photos of a reproduction at Old Salem Village in Winston Salem.

I had a spring pole lathe, but it got to be a pain using it at living history events because of the problem with transporting the long pole. Finding a good straight pole is difficult in my part of Nebraska because the trees tend to grow more out in the open. This causes the trees to be more scraggly and gnarly. Not good for a spring pole.

I wanted a pole lathe that I could break down and set up with no tools. I also wanted it to be self-contained so if I had to set up on concrete or in a building I could. The Moravian spring pole lathe was the ticket. I will 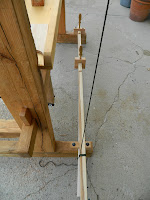 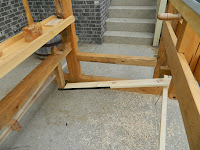 primarily use the lathe to turn chair parts, but with the application of a modified tool rest, I should be able to turn bowls. The thing I’m most impressed is the tensioning device I use for my hickory spring. By turning the screw I can move it on the beam thereby changing the resistance. 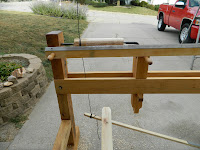 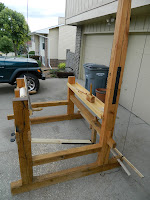 Overall I’m pleased with the outcome, but I’m still tweaking the design. The first problem I encountered was the cotton cord I was using was stretching. I fixed this problem by using 550 parachute cord…I know this is not historically correct, but for now, it will have to do.  I am also not fully satisfied with the foot treadle. It’s weight and the combination of the leverage caused by the pitman arm robs tension from the hickory spring. The easiest fix is to add weight to the end of the spring to counteract the weight of the treadle, but I will have to play around a bit first as the treadle is awkward to use. It needs more refining than just adjusting the weight.

Last week I used it at the local museum's pioneer day. The lathe drew a crowd which is always good because I want people to get involved and uses the tools I display not just watch me use them. The lathe was the definite favorite of the kids. Most of the people that tried the lathe could not really coordinate the foot and tool action together, but in the case of the children, it didn't matter they just want to work the treadle. I just about could have charged admission for the amount of kids wanting to pump the foot treadle. It actually worked out nice because it was extremely hot and humid and I had plenty of child labor to power the lathe while I did the turning. 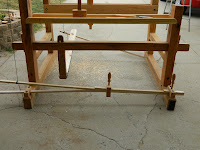 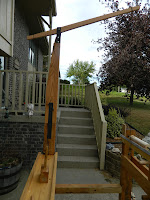 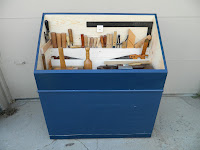 Summer has kept me busy, but I am still making progress on my tool chest. All I have left to do is make the lid and finish painting it. Thought I would share some pictures in its current state.

A few things I've done different is I've added a drawer for my large chisels and a shelf for awkward sized tools like my bow saw and large gauges. I also designed my locking battens to run inside of the door supports. My saw tills are nothing fancy, but they are more universal so if I change saw sizes I won't have to redesign the tills. 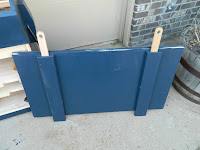 The box is heavy but I can still muscle it around. I really like this design everything is easy to get to and when I take it to living history events I will be able to lock it up. 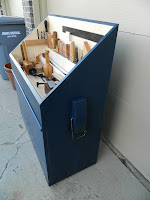 In other news I came across a Cesar Chelor molding plane at local rural museum. It was displayed with a bunch of trashed out nineteenth century tools that anyone could pickup and play with. It took a bit of convincing the staff that this was a special plane of historical significance and should be safe guarded. After offering to buy it (for a large sum of money) and providing them with documentation of its importance they now realize its not some old junk plane donated by a farmer. Actually an old farmer did donate it in 1995 just before he passed away. He must have still been using it because it has wood jammed in the throat. I will have more on this story later. 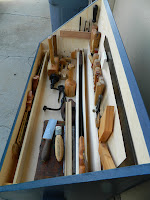 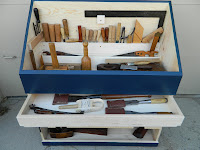 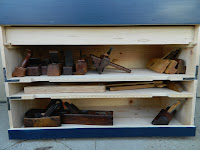 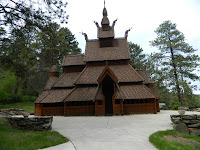 Over the weekend my family and I vacationed as we always do in the Black Hills. My wife was looking for things for us to do that we hadn't done before when she ran across an advertisement for a replica Stave church in Rapid City. I was a bit skeptical at first thinking that this must be some kind of tourist trap. Boy was I wrong! It is a full-scale model of the Borgund stave church built around 1150 in Norway. It is simply a wonderfully built reproduction. It was finished in 1969, but you would think it was only a few years old by looking at it. Besides the stave church, there is a small museum located in an original log cabin showcasing some outstanding antique Norwegian made woodenware and furniture.

Check out the link and go see it you won’t be disappointed. http://www.chapel-in-the-hills.org 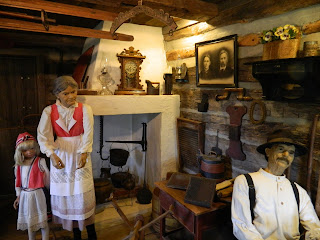 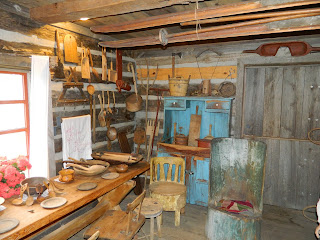 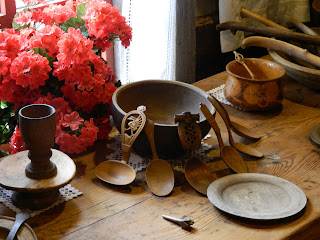 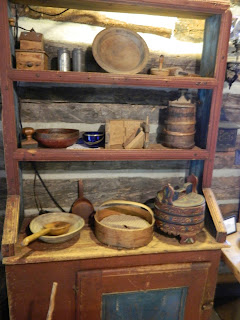 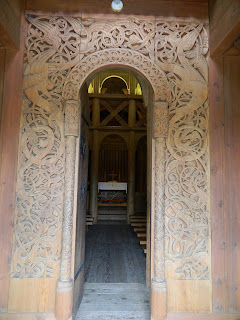 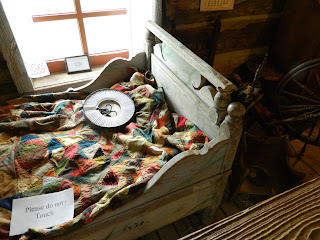 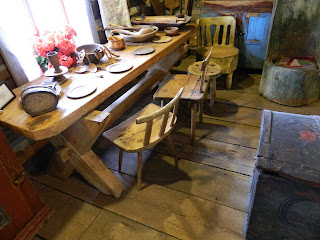 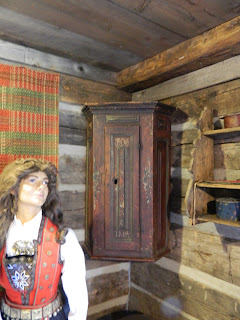 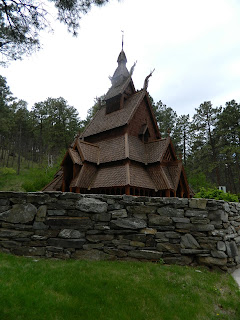 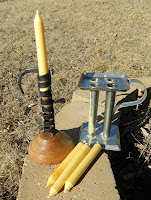 A few months ago I forged out a spiral candlestick common to the eighteenth century. While this is obviously no great feat in the realm of blacksmithing, I’m still happy with the way it turned out. I've heard these spiral candlesticks referred to as “courting candles”. The idea being that parents would adjust out a section of candle and when it burned down to the frame of the candlestick the date was over. I believe this is more folklore than fact.

In the 18th and well into the mid 19th century, people were using tallow candles. They were cheap and could be made on the frontier using locally available resources. The problem with tallow candles is they tend to be soft and prone to flopping over if unsupported. It’s my belief that these candlesticks were used to support the tallow candle within the spiral frame. Unlike my picture which shows the candle all the way up, the proper use would be to have the candle down inside the frame. The user would    then turn the handle like the one seen on the right of my candlestick. This would work like a screw and follow the spirals of the candlestick thereby lifting the candle.

Next to the candlestick are candles I made the other night. They're made with a 50/50 mix of beeswax and beef tallow. I mixed the candles with beeswax to make them harder and cleaner burning. I've read that this was done in the past to stretch-out the more expensive beeswax. Beeswax is expensive even by today’s standards. 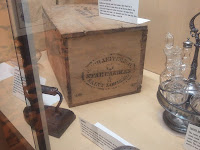 For some historical background, an advertisement in the Nebraska City News, dated February 27 1858,  list the prices of goods sold at a local store. The going rate is as follows: “Candles Star 35cts”, “Tallow Candles 15-20cts”. It doesn't state what quantity the candles were sold in, but obviously tallow candles were much cheaper. I don't know if "Star" is a brand of candle or a type of candle.

To the right is a picture of a box of Star Candles recovered from the Steamship Bertrand that sunk in the Missouri River north of Omaha Nebraska on August 1st, 1865. It was located in 1968 and contained a sizable quantity of candles and candle molds.

If you’re wondering, tallow is nothing more than rendered down animal fat. It can be from deer, beef cow, or just about any other type of animal. Pork fat; however, tends to stay soft and doesn’t burn as well as beef fat in my opinion, so I would avoid it. If you’re interested in making tallow I suggest watching Keith Burgess’s videos at https://www.youtube.com/user/historicaltrekking
Posted by Frontier Carpenter at 3:45 PM 6 comments: 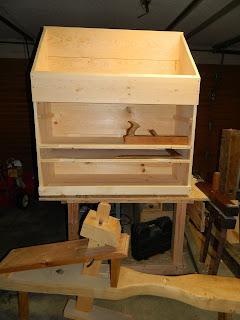 Just thought I’d post an update on where I’m at on my Dutch style tool chest.

I've got the chest together and I think I’m really going to like it. I put my shaving horse in the picture so viewers could get an idea of its size, it big! 40 inches long by 16 inches deep. The small middle shelf is for my bow saw, panel gauge, and large wooden square. Just below the main box will be a thin shelf for my large slick and framing chisels, you can see the runners for the drawer in the picture. One thing I’m doing different is that I am making my battens for the removable front panel slotted to hold my locking runners. That way I don’t need separate brackets.

The only real problem I've had has been the warped side panels. This caused the dadoes for the shelves to be cut uneven which cause a gap between the shelves and the side panels when they were assembled. Not sure what I’m going to do about it. I will either leave it as is or I might make metal reinforcement brackets to hide and reinforce it like in campaign furniture.

Well more woodworking and painting, then its off to the forge to make my hinges and handles. When I get it done I will take it outside and take better and more detailed pictures.
Posted by Frontier Carpenter at 6:14 PM 2 comments: